A Cyber Senior mentor and graduate at graduation.

In December 2015, Seattle Parks and Recreation, in partnership with Group Health and Ageis Living, hosted its first graduation for tech-savvy seniors. 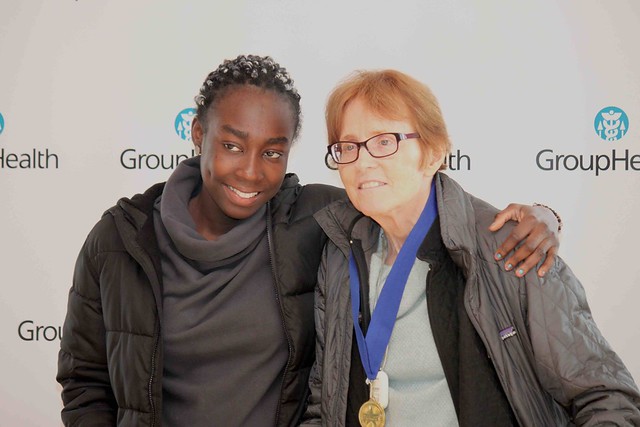 This year, Group Health and Ageis Living approached Seattle Parks and Recreation to help launch the Cyber Seniors program aiming to bridge the generation gap when it comes to technology education. Teens at Garfield Teen Life Center mentored seniors on how to use a computer or smart device independently. The program empowered students and provided seniors with tools to safely engage online and interact with peers and family. At the end of the six-week program, the seniors were able to send emails, complete Google searches, Skype, text, use Facebook and many other applications and the youth experienced being valuable leaders in their community.

On April 30, Garfield Teen Life Center’s Play 60 Fitness Zone was renamed The Willie Austin Play 60 Fitness Zone to honor Willie Austin, a friend and mentor to many in the community, who passed away last year.  Austin co-founded the Willie Austin Foundation in 1997, a nonprofit organization dedicated to providing youth with essential physical fitness activities and connecting them with personal trainers. Austin played football as a defensive back for the University of Washington in the early 1980s and later became a champion weight lifter.

The Play 60 Fitness Zone was donated to Seattle Parks and Recreation by the Seattle Seahawks in January 2011 as part of the NFL Play 60 program, a campaign that encourages youth to be active for at least 60 minutes every day. The Austin Foundation supported the program at the teen center by providing trainers to support and monitor the students’ progress.

“Willie Austin was one of the greatest Seattleites to ever live,” said Mike Flood, the Vice President of Seahawks Community Relations. “I hope his spirit lives on in everyone that works out here because he was a great human being.”

“This room was part of Willie’s legacy, and we want to continue that legacy today,” board member Dennis Cook said.

Austin Foundation youth helped christen the room’s new identity by participating in a core workout after the ceremony.

“Willie believed that if you can reach just one life, you have the potential to reach millions of lives,” board member Rev. Terrence Proctor said. “I think we can have an impact on the entire world.”